A Day Out in Dunster - The Old Kiln

This was the first of a series of Webinars for SANHS

A Webinar is a live on-line presentation with questions from the audience fielded through the chairperson. This allows interaction between the lecturer and the audience. In this case we had three people – a producer (Nathanael Williams) to manage the event; a chair (Lizzie Induni) to introduce the event and to field questions; a presenter (David Dawson) to deliver the content. The content was drawn from previous fieldwork and research, from published materials, from the presenter’s library of still images and from moving images captured for the occasion by the chair and the presenter. It is important to give proper acknowledgement to all people and institutions involved in all stages of the project in the commentary and in the end credits.

David Dawson’s lecture began with a short film viewing Dunster High Street which showed the castle, the 12th century planning and the Yarn market at the top of the High street. The film panned round to the left to show the kiln which is at the top of the High street behind the former outbuildings of the Luttrell Arms. The kiln was built in 1759 commissioned by Henry Fownes Luttrell. The place the kiln was built is surprising as it is on the top of a small hill. There must have been considerable difficulties in carrying the clay up to the kiln and the fired pots down again. David Dawson suggested that the reason for building it in that position was as a decorative feature to improve the views from the castle where Henry Luttrell lived. In the 1760s the concept of adding an industrial building to enhance the landscape was part of the picturesque concept of beauty current at that time.

The kiln pottery was run by John and Ruth Mogg of Bristol. They built the pottery house in the Old Park and ran it until Ruth retired just after John’s death in November 1760. In summer 1761, James Norris came from the Horton potteries in Somerset to take on the work which he ran till 1860, when the pottery was part dismantled.

The kiln is an early type of bottle kiln; it is a simple updraught kiln with a chimney to enhance the draught. It has two fireboxes designed specifically to burn coal.  As well as the fireboxes, the labyrinth, which was used to distribute the heat under the original ware chamber floor (removed and levelled off in the 1860s) survives.

The rage of ceramics made were red earthenwares with internal lead glaze that generally fired speckled brown. The pottery was primarily designed for the larder to preserve food and the kitchen – jars up to 1m in diameter, pancheons, bowls, jugs, cups and even the odd chimney pot.

Documentary evidence in great detail survives in the Luttrell archives. It ties in neatly with the archaeology and the painted record of the estate developments initiated by Henry Fownes Luttrell.

About 20 years ago archaeologist Hilary Binding contacted David Dawson to draw his attention to the importance and current state of the kiln. The refurbishment and safeguarding of the kiln began with the kiln being scheduled and agreement with Exmoor National Park and National Trust. The repairs to the fabric of the kiln were carried out by ENPA and Sarah Pennall who stabilised and limewashed the building. The kiln was recorded using laser-scan technology.

At present it is possible to visit the kiln, which is accessible at all reasonable hours. There is a leaflet from Exmoor National Park:

Other kilns which were functioning at the same time were Winchcombe, Somerset Brick and Tile Museum, Bridgewater, Barnstaple and Bovey Tracey. David Dawson and Ollie Kent have also written a paper for the Society for Post-medieval Archaeology specifically about the old kiln at Dunster. 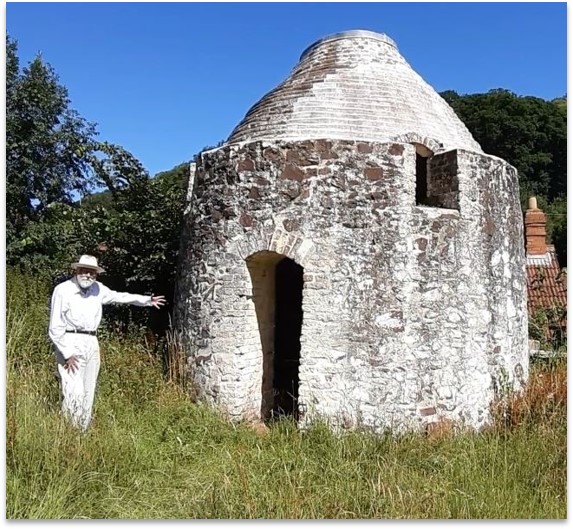